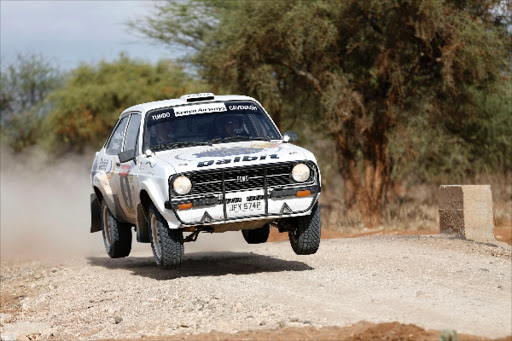 The event is sponsored by Safaricom, Vivo Energy, Sarova Hotel, DT Dobie will start from Mombasa and will tackle the first four days of the competition within Kenya.

•The event has attracted 20 drivers and will cover 24 stages totaling 4500 kilometres across Kenya and Tanzania.

•This year’s rally will revolve around Voi, Arusha and Tanga. Each day will consist of three competitive stages, and transport or liaison sections.

This year’s edition of the Safaricom East African Safari Classic Rally starts this morning with a Shake Down at the Mombasa Cement track.

The event will give crews a chance to put final touches on their cars and also give some of the first time competitors a chance to get a feel of what to expect in regard to the terrain and the climatic conditions.

The event will start in Mombasa and will tackle the first four days of the competition within Kenya while the next five, including a rest day, will be in Tanzania before returning to Kenya for the final leg.

The event has attracted 20 drivers and will cover 24 stages totaling 4500 kilometres across Kenya and Tanzania.

Father and daughter Joe and Kate Hayes are among those enlisted for the event as they make their debut in Classic rally. The pair has been involved in motorsports for over a decade.

“I read about the East Africa Classic Safari Rally and we were intrigued by the adventurous event. Tuthills have built us a terrific car and we can’t wait to experience the full excitement of East African rallying,’’ said Joe.

America’s Renée Brinkerhoff arrives in Kenya as a seasoned competitor. Her 1956 Porsche 356A rally car has so far raced on four continents as part of the Porsche 356 World Rally Tour.

For her first African rally, Brinkerhoff teams up with daughter Juliette as navigator. This year’s rally will revolve around Voi, Arusha and Tanga.  Each day will consist of three competitive stages and transport or liaison sections.

Total distance will be 4,500kms of which 1,500kms will be competitive distance covering 24 stages in both Kenya and Tanzania. On any given day, crews will be expected to cover between 390 – 500km (a combined distance of stage and transport).

The event which ends on December 6 will see the longest stage cover 160kms and the shortest will be 60kms. The East African Classic Safari Rally has been running every two years since 2003 and is open to two-wheel drive, naturally aspirated rally cars built before 1985.