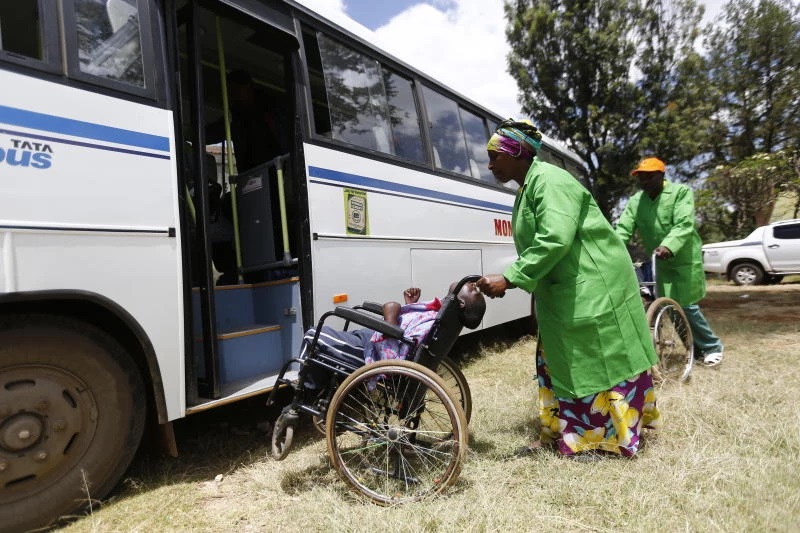 Astate of ecstatic frenzy engulfs Sahajanand Special School as it prepares a graduation ceremony for its first lot of students with disability.

One of the students, 65-year-old Kahindi Kenga, appears in an ambivalent state. He suffered from microcephalus, a rare neurological condition.

Kenga is one of the 30 Technical Vocational Education and Training (TVET) students to graduate with special skills in power mechanical, electrical, sign language and agriculture.

“He was rescued and brought here by well-wishers. In the Chonyi community, children born with this condition are killed because they say it is a bad omen,” said Principal Patrick Mzungu.

The rare neurological condition impairs development or growth of the body. The brain does not develop properly, resulting in a head smaller than normal.

“It is easy to mistake him for a seven-year old. He also suffers dwarfism and his small stature and intellectual disability somehow makes him popular among students,” said Mzungu. Kenga was rescued 12 years ago after decades of hide and seek. At one time, he had to hide from a gang of youth baying for his blood over a drought that hit the area in the 90s.

Now, he feels quite at home with the 857 students at the school. The school caters for all disability categories.

“We have the hearing impaired, mentally handicapped, cerebral palsy, HIV cases, autism, the handicapped, and even albinos in both primary, secondary and TVET institution,” said Mzungu.

Take a quick survey and help us improve our website!

Eight-year-old Karengit Lotukei who had been tethered on a tree under the scorching sun at Cheptunoyo village in Tiaty, Baringo County on August 26, 2015 has found a home here. Mzungu came to the rescue of the boy after the Standard published his story and KTN aired his plight. Twenty four candidates from the institution’s Special Secondary School sat for last year’s KCSE examinations. The first student with mentally handicapped scored a mean grade of D.

In 2013, the institution was declared a centre of excellence. In July 2019, it will host the World Conference for Persons with Disabilities.

Sahajanand Special School opened its doors in 2006 to children and TVET for people with disabilities.

Sitting on a 123.5 acre piece of land, the school is a complex. It has dispensaries and bookstores and its tailoring department is arguably Africa’s biggest Schoolfor people with disabilities.

Situated in Mtwapa, Kilifi County, it draws its students from as far as the DR Congo, Burundi, Southern Sudan, Tanzania and all parts of Kenya.

It is run by 50 teachers from TSC and 150 staff on the payroll of Mombasa Cement, the main donors of the programme.

Mombasa Cement spends Sh10 million every year in food and other services to make the learners comfortable.

According to German volunteer Natasha Mohn, some of their charges are so severely disabled they have to train them how to sit and other basic functions like holding up their heads.

“We also deal with the paralysed who can hardly walk and others with deformed limbs whom we all train to be independent,” she said.

They also run an occupational therapy department and an alternative therapy division. Annuradha Bhalla, a therapist at the institution, helps the disabled learn self-dependence even as it seeks to correct their conditions.

“We have many special cases and we employ acupressure massage, chiropractic healthcare, speech therapy among others to help these children,” she said.

Mzungu said there are note takers to help the students record what they have been taught and help them write their examinations.

“Some of these students do not have limbs that can hold a pen and therefore someone is allowed to write for them. During examinations, the student tells the note taker what to write and they take the answers on their behalf,” he said.

The school has a capacity for 1,000 students but cannot take in anymore as they are experiencing a shortage of teachers.

“We require at least 30 more teachers to deal with the numbers here and the promise by TSC to deploy more is yet to materialise,” said Mzungu.

Currently, 200 have been cleared and are on a waiting list but cannot be absorbed as the teaching department is overstretched.

“We only take those who have been certified by a government assessor to be deserving from any part of the country,” said the principal, ruling out the possibility of walk in admissions.

When the school closes, many students do not have a home to go to. As teachers leave for a well-deserved holiday, the other staff will remain behind to take care of those that have no where to go.