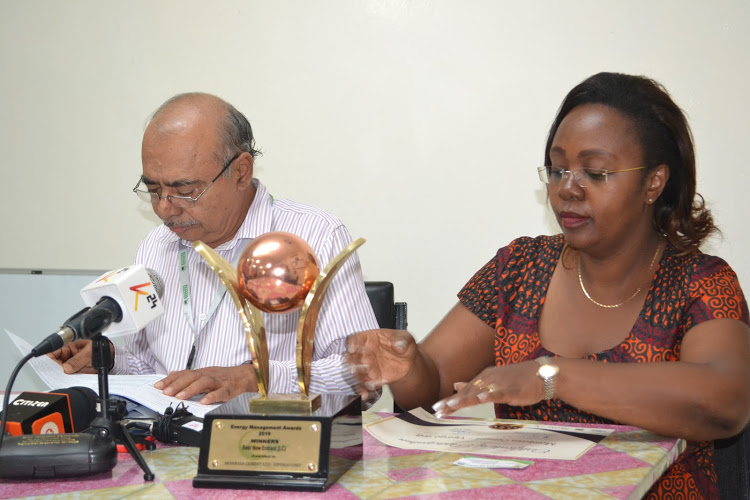 Mombasa Cement Vipingo Unit industry has won a prestigious award as the best energy saving company in the country.

The Unit which is one of the multi-billion giant cement producing company plants in Kenya was established in 2009 and has been able to save between Sh. 120 million to Sh. 122 million energy costs due to initiatives of saving power from the plant.

The Industry has also been recognized by the Kenya Association of Manufacturers for its efforts in saving energy.

Speaking at the plant after receiving the award and certificate from the Kenya Association of Manufacturers he said at one time they lost power for 16 days making it difficult to do operations.

”There has been a lot of challenges, too much power interruptions, in 2016 we lost an  850 kilowatts motor,” he said.

Chandrashekarial said currently due to the energy-saving plan they are able to run the plant with full efficiency between 750  to 850 Kilowatts.

For the last one year nine months he said they have been able to save 1.9 million units of power using the preheater.

Currently, the plant head said they plan to produce power from waste recovery at the chimney which is about 260 to 270 degrees under the WHC system.

When they started the company he said they got a major loss after the Silo collapsed leading to stalemate for 2 years when they constructed another one.

He said current sales have increased particularly in the coastal region due to the high demand for cement being produced.

In 2009 he said they used to sell 65 tonnes per day but currently they are selling over 1000 tonnes of cement.

He said they plan to plant 1 million trees inside and outside the plant in their 300-acre piece of land.

Joyce Njogu the head of KAM consulting who was present during the press briefing hailed the company for its efforts in energy saving and winning the National award having participated for the first time this year.

She said the issue of Power interruption is a major issue but they had begun engagement with KPLC in the region to ensure their constant power supply for industries.

Njogu said they have initiated even whassup groups with company and industries to ensure smooth communication and swift response.

They aim she said was t ensure issues of costs of power, competitiveness quality of power are addressed.

Already she said the government came up with the Ribit Scheme as part of the GDP with the Big four agenda which aims at the growth of energy up to 15 per cent from the current 7 per cent.

”We have a long way to go to reach the 15 per cent electricity Ribit Scheme,” she said.