HomeNewsCorporate Social InitiativeFrom a smelly dumpsite to a relaxing public park: The alluring tale of Kibarani

From a smelly dumpsite to a relaxing public park: The alluring tale of Kibarani

For years, Mombasa has been the focus of Kenya’s tourism, what with its warm weather and beautiful beaches. Its world-class hotels added to its attraction.

But, for years, a few kilometres from these attractions, tourists would be assailed by the stench from Kibarani landfill, where much of the port city’s waste — now standing at about 2,200 tonnes of solid waste every day, according to the National Environment Management Authority (Nema) — would end up.

Management of waste, now delegated to county governments, has been a challenge to Kenya for many years. Most counties, including Nairobi and Mombasa, have struggled largely due to illegal dumping and ever-rising populations, which further stretches the system.

The port city solely relies on landfills where much of the waste, about 90 per cent, is openly dumped or burnt.

For 50 years, the waste ultimately ended on Kibarani landfill that is located within the Makupa Causeway (the causeway links the mainland to the Mombasa island).

Moi International Airport, the Standard Gauge Railway Mombasa Terminus, Kenya Pipeline and other key state agencies and infrastructure are found in the mainland.

Mercy Kerubo who grew up at Tudor, one of the town’s residential areas, remembers this from car trips; how she would roll up the windows while fetid garbage trucks lumbered past.

On any other day, the landfill was shrouded in toxic smoke from an eternal internal and invisible fire.

Mombasa county garbage trucks painted yellow and green, carrying a few tonnes of waste each, hurtled up and down the Makupa Causeway, leaving behind clouds of dust worsening the already polluted air.

Tourism stakeholders argued that the optics were bad for business. International visitors, who are key to propping up Mombasa’s economy, had to endure the stench, smoke and dust when travelling by road from the Moi International Airport.

The dumpsite had also been blamed for the outbreaks of various diseases in the city such as the cholera, dengue fever and the infamous chikungunya.

The rehabilitated Kibarani dumpsite in Mombasa that has been transformed into a recreational park, in this photo taken on January 6, 2020. PHOTO | KEVIN ODIT | NATION MEDIA GROUP

“I do not know what mechanism you will put in place, but I want that dumpsite closed by end of June (2018). No more dumping of waste in Kibarani,” Mr Joho said then.

However, efforts to transform the area hit a snag after private developers invaded the place and started putting up structures. Half of the area at Kibarani which is a prime area adjacent to Kenya Ports Authority harbour had been grabbed by at least 30 companies

The president further said the dumpsite should be decommissioned and used for the development of recreational facilities as part of the ongoing efforts to reposition Mombasa as a top tourism destination in the East African region.

With that, Kibarani dumpsite embarked on a journey to a modern public park.

Soon after, Hasmukh Patel, the director of Mombasa Cement Company commenced rehabilitation of the dumpsite into a public park that has so far cost more than Ksh700 million ($7 million).

The 20-acre dump, containing yards of waste and fill, is being converted into an ecological park, nature reserve and scenic overlook that Mr Patel envisions.

It will be a miracle park once it is done, he tells us when we sit down for an interview.

Less fondly, he remembers the negative impact the landfill had on the health of Mombasa residents and outlook of the city.

“Besides being an eyesore and polluting the environment, the area had also become a breeding ground for mosquitoes that caused problems like chikungunya and dengue fever. There was also a lot of negativity here including rape and theft,” Mr Patel recalls.

Also lack of public spaces cast a dark shadow over the childhood experience for the urban poor families in Mombasa.

It is for these reasons he took it upon himself to rehabilitate the landfill as a community social responsibility programme.

“It will become a garden for people to rest. To me it is a miracle,” Mr Patel added. 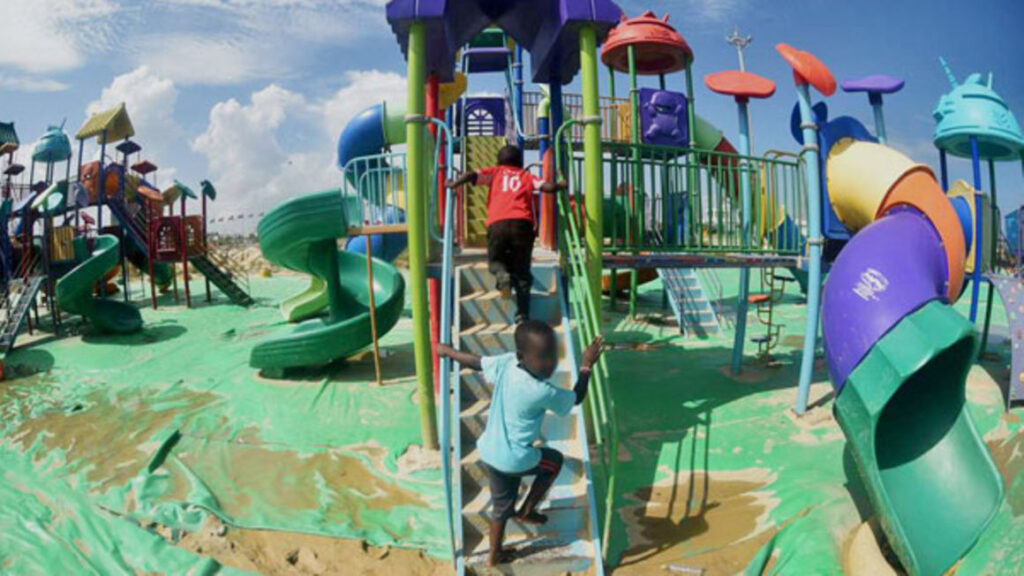 The process of creating the park is no quick fix. For three years, crews have been bulldozing garbage, making way for 500,000 plantings in what may be the ultimate feat of rehabilitation.

They started with levelling the garbage piles and covering the grounds with quarry dust and soil. One of the excavators slid into the sea in the course of the levelling.

Before they would begin the ecological restoration, they had to deal with a massive problem lurking just below the surface as the piles of garbage began to rot and emitting pungent gas.

Workers tried planting wheat and hybrid maize, Uganda sunflower and palm trees on the soil, but nothing would grow on it.

Some of the plants that almost withstood the harsh conditions were broken by the persistent strong winds on the open grounds bordering the sea.

“We had no alternative so we planted mangroves near the sea. We also brought in sisal and coconut palms,” he said.

More than 2,000 mangrove trees have been planted along the ocean.

A super liner was recommended to seal the gas outlets.

“It is not like your cooking gas that comes out from one position. This is gas coming out from all over every minute. We put the liner over the entire area,” he said.

The problem was partially solved by gardening using tyres. The company collected used tyres, filled them with good soil to grow trees. The tyres were also painted green and yellow to add a colour code to the area and also make it attractive.

Fresh water delivered by trucks irrigates the trees. To nudge more nature along, they brought in exotic trees and vegetation.

The uneven rise that was once formed by garbage, is now home to more than 500,000 plant species among them Ashok trees, Christmas Palm trees, Jacaranda trees, Bougainvillea, coconut trees, sisal and Casuarina trees.

Next was how to stop mosquitoes from this breeding in the nearby waters.

“A scientist told me mosquitoes will not breed in water that is not still. We have chosen to put a fountain into the sea of 75 meters’ height with coloured lights.”

Toilets have also been built, however, a system to filter out the sewage has to be put in place before they can be used.

“You cannot pour raw sewage into the sea just as you cannot dig a pit. We are trying to put boulders so the sewage will filter itself like a bio digester,” said Mr Patel.

While the rehabilitation has had influence from various experts, innovative solutions by the most unlikely people have come in handy.

“Everyone has got their own ideas and this allows us to pick whatever works or appeals best. One offered me the tyres idea, another the fountain. Most of the solutions have come from common citizens.”

Nature, Mr Patel says, will gradually reassert itself as the rehabilitation continues.

“It took people 50 years to mess up Kibarani. I should take five years to clean up the mess.” 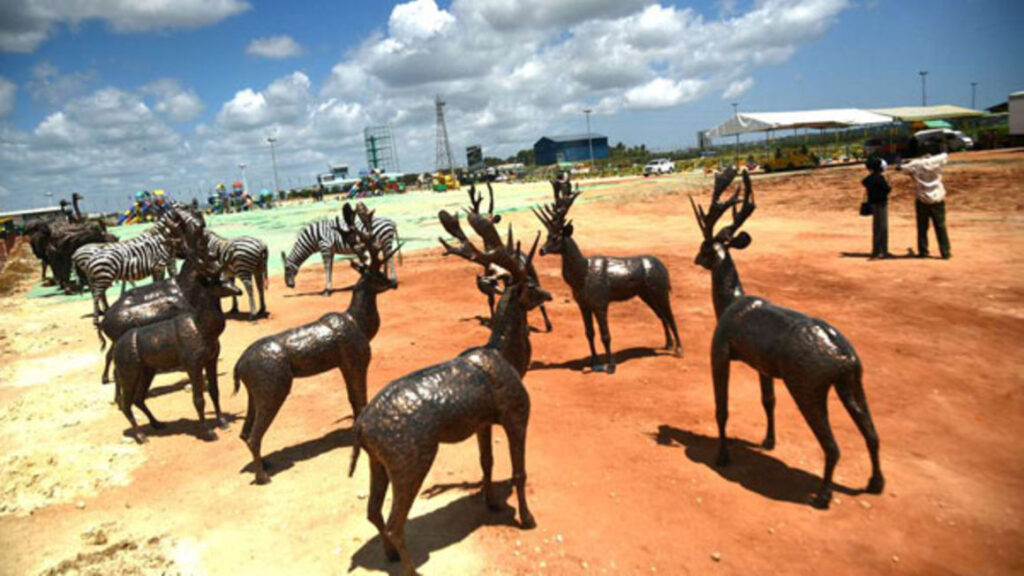 The rehabilitated Kibarani dumpsite in Mombasa that has been transformed into a recreational park, in this photo taken on January 6, 2020. PHOTO | KEVIN ODIT | NATION MEDIA GROUP

The fact that trees and vegetation have started forming and growing naturally is a huge sign that the system is working well.

The vision for the park’s future is a grand one. It includes a wide variety of uses — structured play spaces, open lawns, animal habitats and picnic grounds just like Uhuru Park in Nairobi.

At a capacity of more than 20,000 people it will be among the biggest green parks in Mombasa with different species of plants and flowers, that is when it is fully developed and opened three years to five years from now.

While work on the park continues, it is already serving as a recreational space. The park was the venue of New Year celebrations, which were marked with a concert and summed up by fireworks at exactly midnight, five months after it was opened to the public for selected recreational activities.

On this bright and sunny day when The EastAfrican visited the park, Erick Ronalo, a landscaper stands atop a mound overlooking the ocean in the distance, but there is not a single scrap of garbage.

The flocks of Indian house crows that thrived on rotting garbage have moved on giving way to other bird species. Families and pigs who scavenged in the mountains of solid waste have also moved away.

Rehabilitation is not a one-off affair but takes many years to accomplish, says Mr Ronalo who works for Mombasa Cement.

While development continues, another part of the area has been turned into a garden with sculptures of wild animals sitting on artificial grass.

Some 200 flags from different countries around the globe are hoisted along the stretch of road bordering the park. Another lot of flags representing the 47 Kenyan counties will also be put up.

This has made the area an alternative tourist site for many Mombasa dwellers as it is a mere stone’s throw away from their homes and one of the few recreational spaces in the city where one can relax and enjoy themselves free of charge.

When we visited tens of cars were packed where occupants in each car were whiling away time. On one side of the park two stalled excavators and an old garbage truck have been repainted and exhibited.

Families can be spotted walking across the park, photographing sculptures and some resting on the plastic turf under parasols.

Just steps away is a fantastic playground for children with a variety of structures to clamber over, climb through, spin around and slide down.

On a weekends and public holidays, the new recreational facility, teems with residents.

The EastAfrican met Desmand Hayanga from Mikindani (West of Mombasa) who had brought his children to the park for a stroll.

“The park is very beautiful. The playgrounds are really attracting families. The good thing is there are security officers who watch over the children as they play,” he said.

Mr Hayanga told us it is a more affordable option for people living in West of Mombasa compared to other recreational facilities such as newly renovated Mama Ngina Waterfront and Jomo Kenyatta Public Beach.

“I have only spent Ksh50 ($0.50) as bus fare unlike earlier when I used to take them to the beach where I would spend more than Ksh1,000 ($10) including fare and buying them snacks. There are also fun things to do at the park at no fee,” he said.

The crowds are also attracted by food and treats for children such as candy floss donated by Mr Patel.

Although the park closes after sunset, it is patrolled during the day by uniformed security guards and during our visit two policemen kept watch.

“We have enough security from the guards and also police officers deployed here. There is no reason to be scared. When it is complete it will attract more visitors than other parks,” said Mr Ronalo.